Our lab has been involved in Synthetic Biology since its inception developing fundamental genetic technologies for precise and predictable control of gene expression, uniform design of gene expression networks, technologies for genome-scale manipulation and characterization of gene function; the design of host strains optimized for engineering for different applications; and foundational genetic and computational/data science technologies that support the creation of biofoundries. We are very interested in predictable engineering in complex contexts beyond the bioreactor. Such applications emphasize the need for predictive/predictable, actuarily trustworthy biological design technologies.  We have ongoing projects involving the engineering of microbes, microbial communities, and bacteriophage cocktails for applications in sustainable materials production and biomass utilization, agriculture, bioremediation, and human health. We are most interested in those applications that have existential implications for humans on earth- from solutions for antibiotic resistance to terraforming. 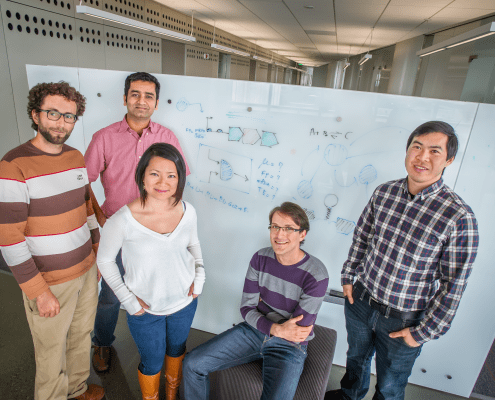 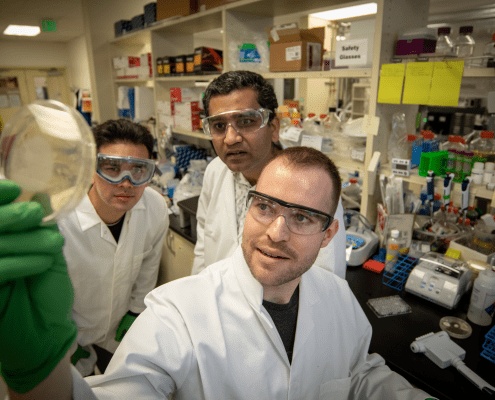 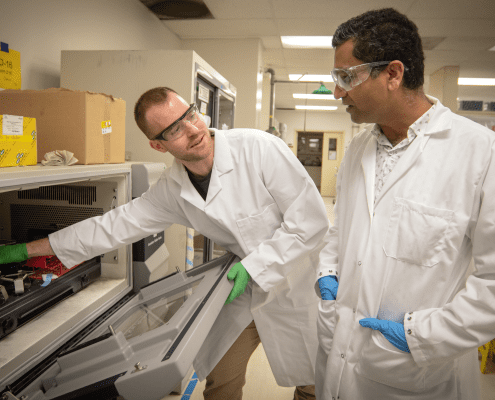 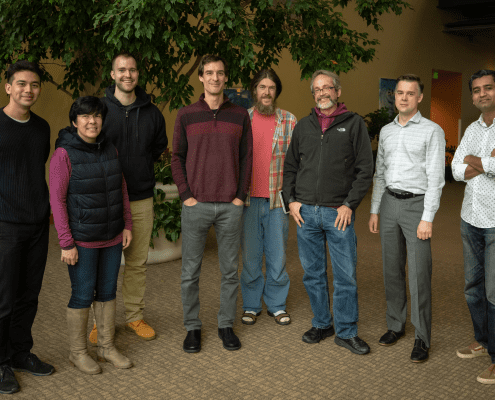 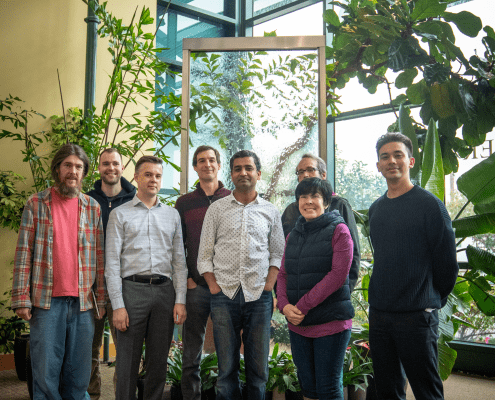 Precision genome editing accelerates the discovery of the genetic determinants of phenotype and the engineering of novel behaviors in organisms. Advances in DNA synthesis and recombineering have enabled high-throughput engineering of genetic circuits and biosynthetic pathways via directed mutagenesis of bacterial chromosomes. However, the highest recombination efficiencies have to date been reported in persistent mutator strains, which suffer from reduced genomic fidelity. The absence of inducible transcriptional regulators in these strains also prevents concurrent control of genome engineering tools and engineered functions. Here, we introduce a new recombineering platform strain, BioDesignER, which incorporates (i) a refactored Î»-Red recombination system that reduces toxicity and accelerates multi-cycle recombination, (ii) genetic modifications that boost recombination efficiency, and (iii) four independent inducible regulators to control engineered functions. These modifications resulted in single-cycle recombineering efficiencies of up to 25% with a 7-fold increase in recombineering fidelity compared to the widely used recombineering strain EcNR2. To facilitate genome engineering in BioDesignER, we have curated eight context--neutral genomic loci, termed Safe Sites, for stable gene expression and consistent recombination efficiency. BioDesignER is a platform to develop and optimize engineered cellular functions and can serve as a model to implement comparable recombination and regulatory systems in other bacteria.

Pattern formation and differential interactions are important for microbial consortia to divide labor and perform complex functions. To obtain further insight into such interactions, we present a computational method for simulating physically separated microbial colonies, each implementing different gene regulatory networks. We validate our theory by experimentally demonstrating control over gene expression patterns in a diffusion-mediated lateral inhibition circuit. We highlight the importance of spatial arrangement as a control knob for modulating system behavior. Our systematic approach provides a foundation for future applications that require understanding and engineering of multistrain microbial communities for sophisticated, synergistic functions.

A major challenge in genomics is the knowledge gap between sequence and its encoded function. Gain-of-function methods based on gene overexpression are attractive avenues for phenotype-based functional screens, but are not easily applied in high-throughput across many experimental conditions. Here, we present Dual Barcoded Shotgun Expression Library Sequencing (Dub-seq), a method that uses random DNA barcodes to greatly increase experimental throughput. As a demonstration of this approach, we construct a Dub-seq library with Escherichia coli genomic DNA, performed 155 genome-wide fitness assays in 52 experimental conditions, and identified overexpression phenotypes for 813 genes. We show that Dub-seq data is reproducible, accurately recapitulates known biology, and identifies hundreds of novel gain-of-function phenotypes for E. coli genes, a subset of which we verified with assays of individual strains. Dub-seq provides complementary information to loss-of-function approaches and will facilitate rapid and systematic functional characterization of microbial genomes.

Despite intensive study for 50 years, the biochemical and genetic links between lysine metabolism and central metabolism in Pseudomonas putida remain unresolved. To establish these biochemical links, we leveraged random barcode transposon sequencing (RB-TnSeq), a genome-wide assay measuring the fitness of thousands of genes in parallel, to identify multiple novel enzymes in both l- and d-lysine metabolism. We first describe three pathway enzymes that catabolize l-2-aminoadipate (l-2AA) to 2-ketoglutarate (2KG), connecting d-lysine to the TCA cycle. One of these enzymes, P. putida 5260 (PP_5260), contains a DUF1338 domain, representing a family with no previously described biological function. Our work also identified the recently described coenzyme A (CoA)-independent route of l-lysine degradation that results in metabolization to succinate. We expanded on previous findings by demonstrating that glutarate hydroxylase CsiD is promiscuous in its 2-oxoacid selectivity. Proteomics of selected pathway enzymes revealed that expression of catabolic genes is highly sensitive to the presence of particular pathway metabolites, implying intensive local and global regulation. This work demonstrated the utility of RB-TnSeq for discovering novel metabolic pathways in even well-studied bacteria, as well as its utility a powerful tool for validating previous research.IMPORTANCEP. putida lysine metabolism can produce multiple commodity chemicals, conferring great biotechnological value. Despite much research, the connection of lysine catabolism to central metabolism in P. putida remained undefined. Here, we used random barcode transposon sequencing to fill the gaps of lysine metabolism in P. putida We describe a route of 2-oxoadipate (2OA) catabolism, which utilizes DUF1338-containing protein P. putida 5260 (PP_5260) in bacteria. Despite its prevalence in many domains of life, DUF1338-containing proteins have had no known biochemical function. We demonstrate that PP_5260 is a metalloenzyme which catalyzes an unusual route of decarboxylation of 2OA to d-2-hydroxyglutarate (d-2HG). Our screen also identified a recently described novel glutarate metabolic pathway. We validate previous results and expand the understanding of glutarate hydroxylase CsiD by showing that can it use either 2OA or 2KG as a cosubstrate. Our work demonstrated that biological novelty can be rapidly identified using unbiased experimental genetics and that RB-TnSeq can be used to rapidly validate previous results.

Using genome-wide mutant fitness assays in diverse bacteria, we identified novel oxidative pathways for the catabolism of 2-deoxy-d-ribose and 2-deoxy-d-ribonate. We propose that deoxyribose is oxidized to deoxyribonate, oxidized to ketodeoxyribonate, and cleaved to acetyl coenzyme A (acetyl-CoA) and glyceryl-CoA. We have genetic evidence for this pathway in three genera of bacteria, and we confirmed the oxidation of deoxyribose to ketodeoxyribonate in vitro. In Pseudomonas simiae, the expression of enzymes in the pathway is induced by deoxyribose or deoxyribonate, while in Paraburkholderia bryophila and in Burkholderia phytofirmans, the pathway proceeds in parallel with the known deoxyribose 5-phosphate aldolase pathway. We identified another oxidative pathway for the catabolism of deoxyribonate, with acyl-CoA intermediates, in Klebsiella michiganensis. Of these four bacteria, only P. simiae relies entirely on an oxidative pathway to consume deoxyribose. The deoxyribose dehydrogenase of P. simiae is either nonspecific or evolved recently, as this enzyme is very similar to a novel vanillin dehydrogenase from Pseudomonas putida that we identified. So, we propose that these oxidative pathways evolved primarily to consume deoxyribonate, which is a waste product of metabolism. IMPORTANCE Deoxyribose is one of the building blocks of DNA and is released when cells die and their DNA degrades. We identified a bacterium that can grow with deoxyribose as its sole source of carbon even though its genome does not contain any of the known genes for breaking down deoxyribose. By growing many mutants of this bacterium together on deoxyribose and using DNA sequencing to measure the change in the mutants' abundance, we identified multiple protein-coding genes that are required for growth on deoxyribose. Based on the similarity of these proteins to enzymes of known function, we propose a 6-step pathway in which deoxyribose is oxidized and then cleaved. Diverse bacteria use a portion of this pathway to break down a related compound, deoxyribonate, which is a waste product of metabolism. Our study illustrates the utility of large-scale bacterial genetics to identify previously unknown metabolic pathways.

The ecological forces that govern the assembly and stability of the human gut microbiota remain unresolved. We developed a generalizable model-guided framework to predict higher-dimensional consortia from time-resolved measurements of lower-order assemblages. This method was employed to decipher microbial interactions in a diverse human gut microbiome synthetic community. We show that pairwise interactions are major drivers of multi-species community dynamics, as opposed to higher-order interactions. The inferred ecological network exhibits a high proportion of negative and frequent positive interactions. Ecological drivers and responsive recipient species were discovered in the network. Our model demonstrated that a prevalent positive and negative interaction topology enables robust coexistence by implementing a negative feedback loop that balances disparities in monospecies fitness levels. We show that negative interactions could generate history-dependent responses of initial species proportions that frequently do not originate from bistability. Measurements of extracellular metabolites illuminated the metabolic capabilities of monospecies and potential molecular basis of microbial interactions. In sum, these methods defined the ecological roles of major human-associated intestinal species and illuminated design principles of microbial communities.

For many bacteria with sequenced genomes, we do not understand how they synthesize some amino acids. This makes it challenging to reconstruct their metabolism, and has led to speculation that bacteria might be cross-feeding amino acids. We studied heterotrophic bacteria from 10 different genera that grow without added amino acids even though an automated tool predicts that the bacteria have gaps in their amino acid synthesis pathways. Across these bacteria, there were 11 gaps in their amino acid biosynthesis pathways that we could not fill using current knowledge. Using genome-wide mutant fitness data, we identified novel enzymes that fill 9 of the 11 gaps and hence explain the biosynthesis of methionine, threonine, serine, or histidine by bacteria from six genera. We also found that the sulfate-reducing bacterium Desulfovibrio vulgaris synthesizes homocysteine (which is a precursor to methionine) by using DUF39, NIL/ferredoxin, and COG2122 proteins, and that homoserine is not an intermediate in this pathway. Our results suggest that most free-living bacteria can likely make all 20 amino acids and illustrate how high-throughput genetics can uncover previously-unknown amino acid biosynthesis genes.